8th All India Women Artists’ Exhibition 2019 was hosted by Artscapes at the Museum of Fine Arts, Panjab University from April 16 to April 26, 2019. The amalgamation of creative works in various dimensions was inaugurated by Dinkar Gupta, IPS, Director General of Police, Punjab. Dr. Alka Pande, an art critic, took a comprehensive note of the emerging trajectory of women’s contemporary art. About 170 artworks were displayed in the exhibition. Professor Seema Bawa observed the role of women artists and encouraged them to depict their talents in a distinguished manner. Numerous aspects of artistry with intriguing themes were displayed to understand the subtle nuances of life. The Jury member Kavita Nayar saw a new light of horizon in their works. 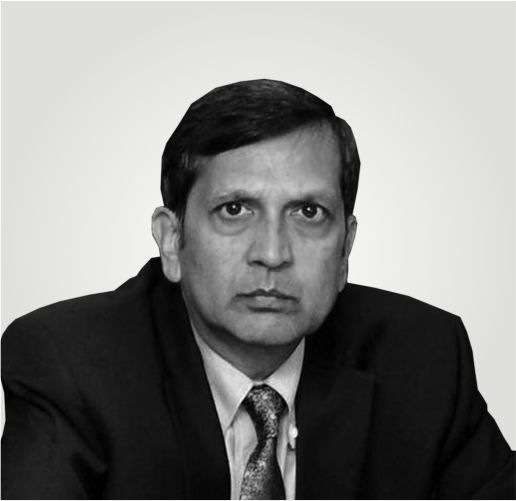 Woman is the role model of power and diversity

It is a matter of great happiness for me that Artscapes is organising its 8th All India Contemporary Women Artists’ Art Exhibition by bringing forth their creativity on national level. Empowering women is the most effective way to ensure the right to equality mentioned in the Constitution of India. Woman is the role model of power and diversity and is a true mirror of our society. With her artistic expression, she definitely has a strong role to play in empowering future. This exhibition, amongst various other activities and events that this organisation does, is a great endeavour that projects the much needed action towards the upliftment of our society and its cultural value. The participants have not only come together from demographic diversity but also from different age groups on one platform.

I heartily congratulate the award-winning artists and all the participants for their outstanding works of art. My applauds and best wishes to Artscapes for their tremendous contribution in the field of art and women empowerment per se. I hope that the members will continue to make such constant focussed efforts towards promoting art on national and international level.

Painting a World of their Own

Ah, well, do I wish that we lived in a world where gender didn’t figure so prominently? Of course. Do I even think about myself as a woman when I go to make art? Of course not.’
-Judy Chicago

Chicago’s views on her own art practice with a concomitant awareness about gender imbalance and on the overt patriarchy that informs social and cultural behavior is very telling; given that Chicago has brought a critical feminist gaze to the gender construct of masculinity, exploring how prevailing definitions of power have affected the world in general — and men in particular, in the way artists view their own work process.

The role of the subversive artist, particularly the woman artist, becomes significant in the exhibitions of Artscapes; which is holding the eighth edition of All-India Women Artists Contemporary Art Exhibition, that encourage women artists to simultaneously engage with creativity and contemporary concerns.

The continuous commitment to the cause of projecting and encouraging women artists through competition, selection and subsequent display can be seen in the larger context of feminist art movements in India and abroad. Through such movements the artist as both an activist with a creative soul and also as a symbol of resistance and subversion of dominant ideology is brought center-stage. Thus, Art enters into fields of political and social activism, becoming one of the catalysts for struggle for visibility, validity and assertion of value. Women artists all over have taken up the issues of oppression, race, colour, and gender. They have succeeded in privileging a special position for women within the larger discourse of cultural practice. Women in art have brought to the fore an agenda that can be differentiated from the largely androcentric art practice. They have done this not merely by questioning and resisting patriarchy but also by endorsing an agenda of their own.

Mainstream art criticism seeks to contain the dichotomy between the woman artist’s richer albeit different lived-world through “placing” or labeling it. There is an inherent inequality and bias embedded in the very language that we use in common as well as academic discourse, where there is a very conscious emphasis on the gender of the creator when referring to women who write, sing, paint, or run for political office as specifically “women writers”, “women singers”, “women painters”, and “women politicians”. Exhibition of works of “male artists” are only mentioned as “artists” without emphasizing the gender. Thus, on the one hand men are seen to be the norm and women an aberration and therefore need to be labelled and /or valorised. On the other hand, women artists, writers, etc., become categories representative of all women while men are perceived to be unique individuals.  This aspect predicates the felt need by women artistes to on the one hand recover a space of their own within the discourse of art and on the other mainstream it from the margins as unique painterly works. To appreciate the polyphony of inherent in these works, we have to be aware of and be sensitive to the heterogeneity of backgrounds, styles and genres the women artists’ represent. The artists in the current show have a larger canvas to work with, especially given the competition format, that allows for a wide array of genres, styles, mediums and sensibilities at play.

This brings us to a significant question regarding as to whether women artist have a world of their own to paint and sculpt qua women artists’ art practice.  Perhaps the training and the technique belong to a shared space of both men and women, where gender is insignificant and at this level it is skill that takes front stage. However, the lived experience, the fears, insecurities, dis-privileging are definitely gendered and at some level do pervade the Weltanschauung of women as artists. The space painted is often personal, with a deep emotive content that seems to somehow be ‘smaller’ but more dense or “thicker”.

The concern with women’s’ art and artist is entangled with the discourse of the individual artefact and its meanings that occurred during ‘the transition from modernism to postmodernism, which was also that from the concept of the artist as a bohemian to the artist as a social thinker; from the microcosm of the studio to society.’

This can be seen in the works of women artists in India who despite a lack of a formal engagement with the feminist movements, have been carving out and recovering spaces as their own. The feminisation of themes, the experimentations with style, uniqueness of sensibility, are all hallmarks of women’s art as can be seen in the current show. This is not to suggest that art produced and conceptualised by women artists is homogenous and monolithic- it is in fact, just the opposite- diverse and vibrant, mirroring the diversity of artists themselves. From the self to the family and from there on to larger social issues and concerns that inform women’s lives and worlds are the tropes within which artists such as Priya Sisodiya’s and Shobha Nagar’s work.

One way to for the viewer to recover the depth of the works could be to examine women’s engagement with art in both historical and critical terms and to relate these with contemporary art practice. Given the colonial discourse within which easel and academy art developed, it is not surprising that traditional arts, which were the forte of women, got marginalised, trivialised and pushed into the background.

Most of traditional arts, be it painting the alpana and the kolam on the floor, or the elaborate paintings on the bridal chamber of Mithila, were and are still done by women, be it in the folk or the tribal style. Neha Jaiswal’s etching Companion uses this style to excavate the notion of nascent violence perpetrated against women by patriarchal societies.

Contemporary art practice by women tends to locate the female and the feminine in the self where there is an increasing concern with the body as the site within which feminine identity is framed. The works of Agomoni Sen and Arati Mauraya highlight this, especially the latter where the woman is gazing at her reflection in the mirror and inviting the viewer to become part of this self-conscious engagement with the self.

Indeed one observes a preponderance of figurative works in the selection. One wonders if abstraction is gender neutral or can we read some degree of feminisation in terms of colours and compositions. We hope that subsequent shows of women artists by Artscape shall be able to provide some insights into the processes and practices that go into making of women’s painted worlds. 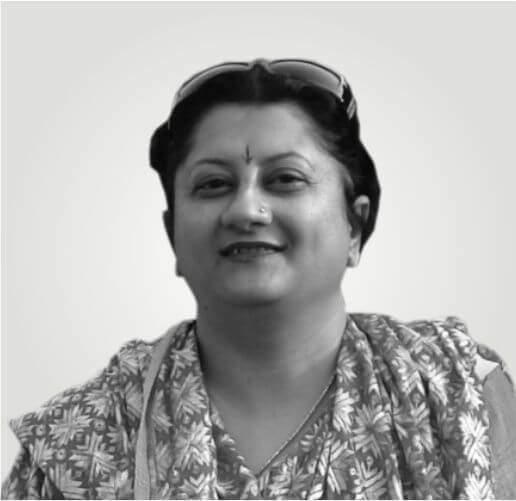 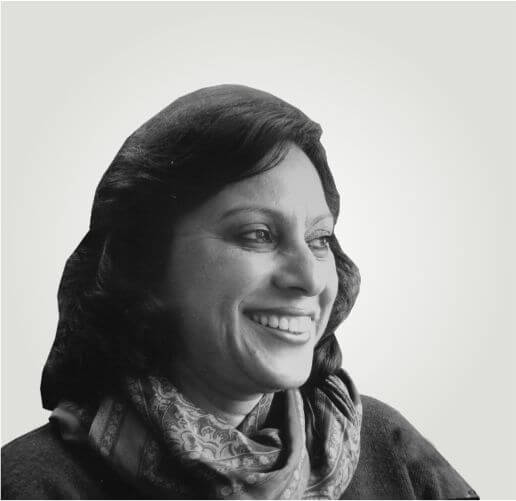 MESSAGE BY THE JURY

It has been a rewarding experience for me to be a part of the jury of the 8th All-India Women Artists Contemporary Artists Art Exhibition 2019 .It is heartening to see that Artscapes ,a non- profit  organisation, is trying to give a special visibility to young women artists .The momentum one requires to sustain and flourish as a contemporary artist after gaining relevant academic training is a challenge every artist faces ,especially women artists who can easily lose their focus with growing social responsibilities as they grow in age .Artscapes as an institution has taken this noble work of recognising and promoting talent of women artists so that they can see a new light on the horizon of their life.

Judging the works of art is a challenging task .While looking at the works I realised that most of the works have a direct association with a particular experience or memory associated with the artist. I could very well identify with this phenomena .Inspite of this commonality there is an immense diversity of expression and mediums .

With the support from Artscapes women artists from diverse backgrounds and  different corners of India can  come under one umbrella to exhibit their works in Chandigarh .A city with its rich architectural heritage has always created an atmosphere for the artist to grow sensuously ,intellectually and sublimely. Artscapes has taken a step ahead by accentuating the role and importance of a female artist in the society by organising an exclusive exhibition and event for women artists from all over India in this culturally rich city.

Born in 1957,Kavita Nayar obtained her bachelors degree from Shantiniketan (West Bengal, India ) which was followed by masters in  College of Art, New Delhi. Recepient of many awards and scholarships like French Govt scholarship, to work in Cite internationale Des Arts. Charles

Wallace India Trust Fellowship as a visiting artist in Oxford University, England. Creative Fund fellowship to work in Luxembourg.  Received Senior and Junior fellowship from Ministry of HRD, India and also Research Grant from Lalit Kala Akademy. She has traveled and participated in workshops and given presentations various countries. She has held  solo exhibitions  in Bose Pacia Modern ,New York;  Oxford University, England; Otterbien University in Ohio; Mauritius, Delhi, Kolkata and Mumbai. Her works are in

Armed with a master&#39;s degree in fine arts, Kavita is a talented young artist from Lucknow. She has […]

Hailing from Allahbad, home for many renowned artists, Neha had  been a brilliant students in both academics and arts.  Neha has participated […]

The effervescent Preeti hails from Panchkula, Haryana. She has been actively participationg in various shows, exhibitions in Haryana, […]

A talented young artist from Sholapur, has been a recipient of special jury award at 123rd All India Annual […]

Pursuing her M.F.A. (Graphics) , talented and ambitious Arati has many achievements under her belt. She has been awarded at the Annual Art […]

Having won the Zonal Art Award 2017-18, by State Lalit kala Academy, U.P Reetu has proved her mettle in the field of art. With […]

Hailing from Ranchi Agomani has done her Masters in Fine arts from Visva Bharti, Kala Bhavana Shantiniketan. An artist who […]

Priya Sisodiya is a fiercely motivated young artist hailing from Hyderabad. She is doing final year of her BFA degree […] 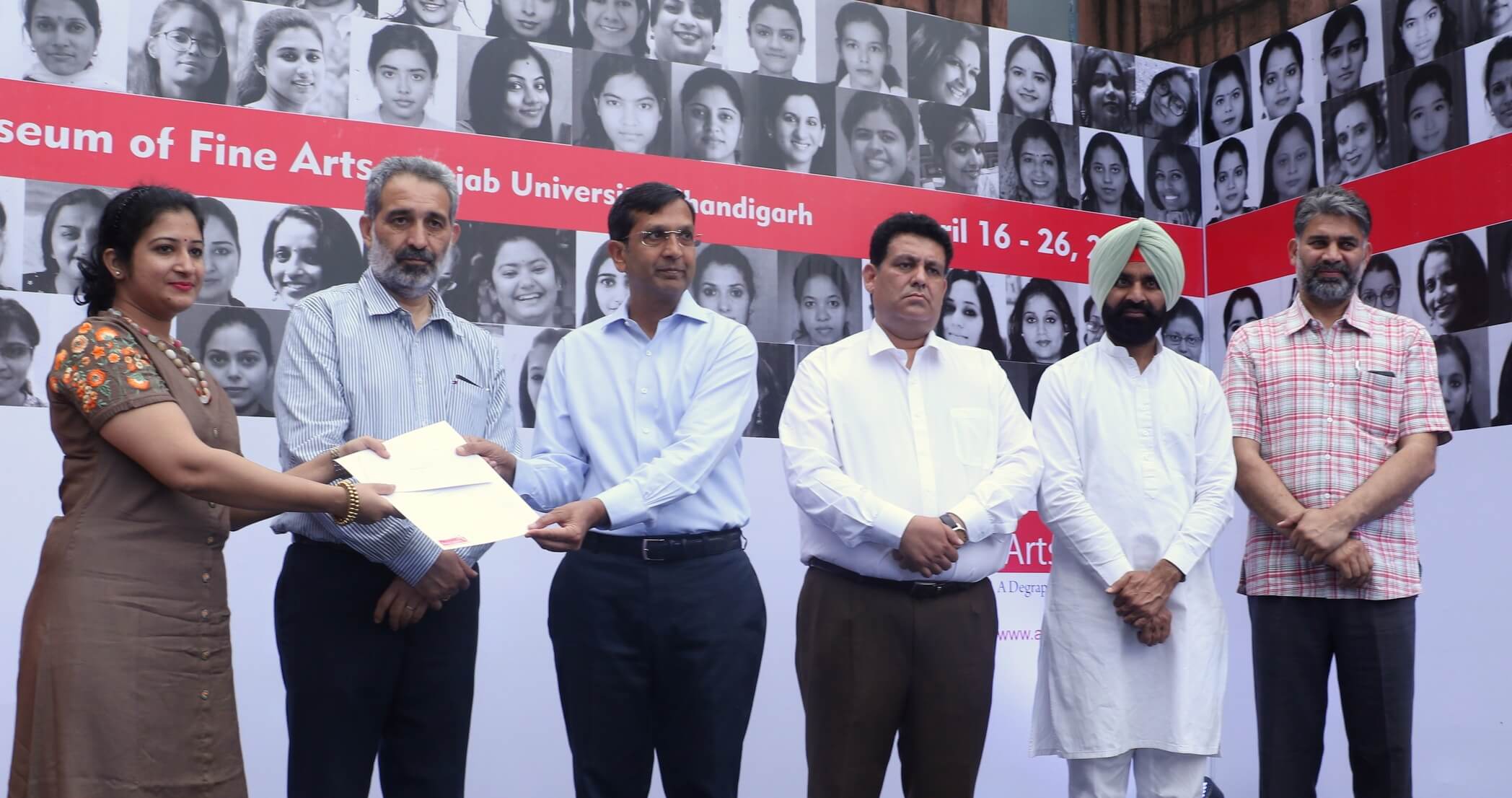 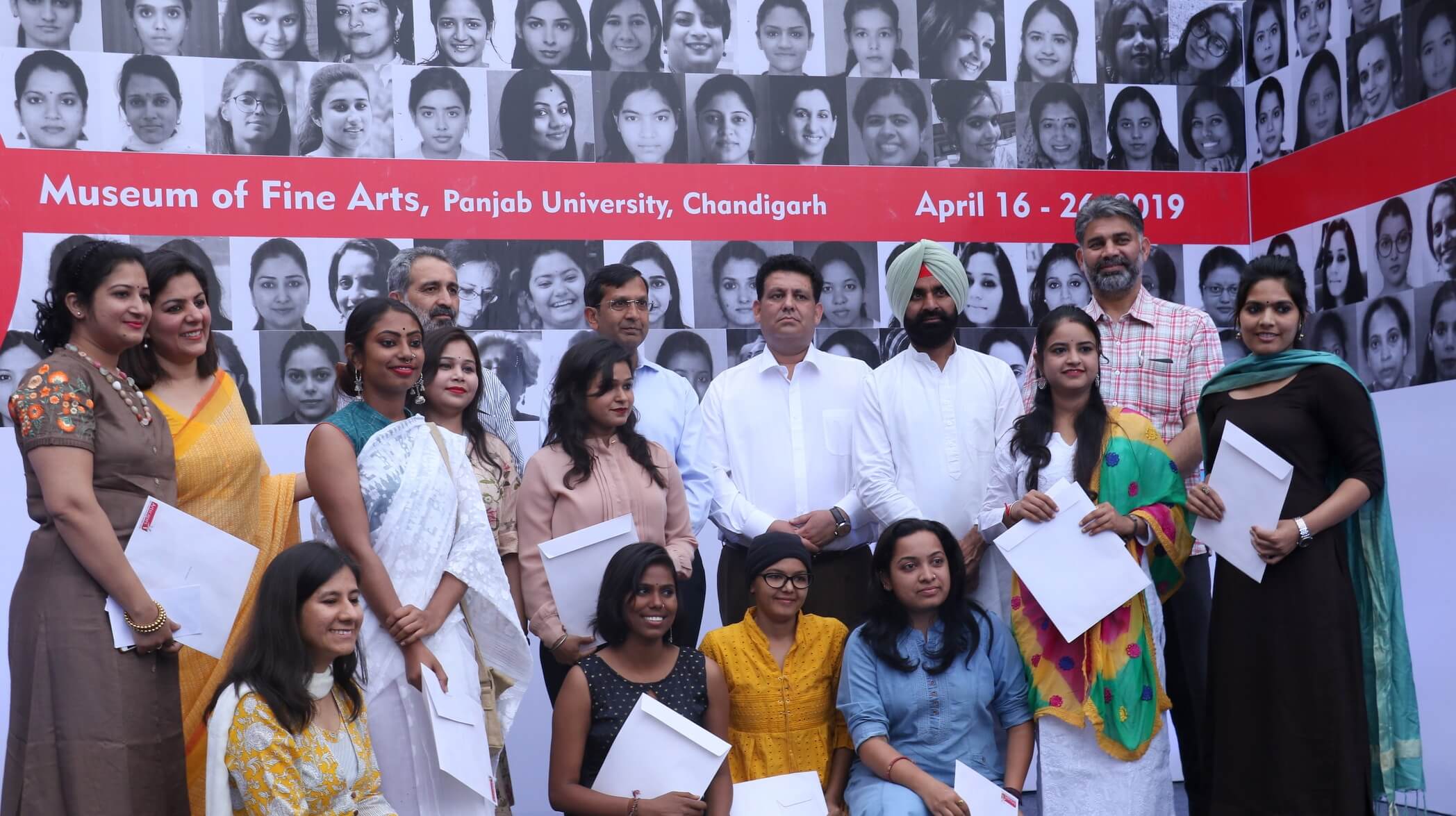 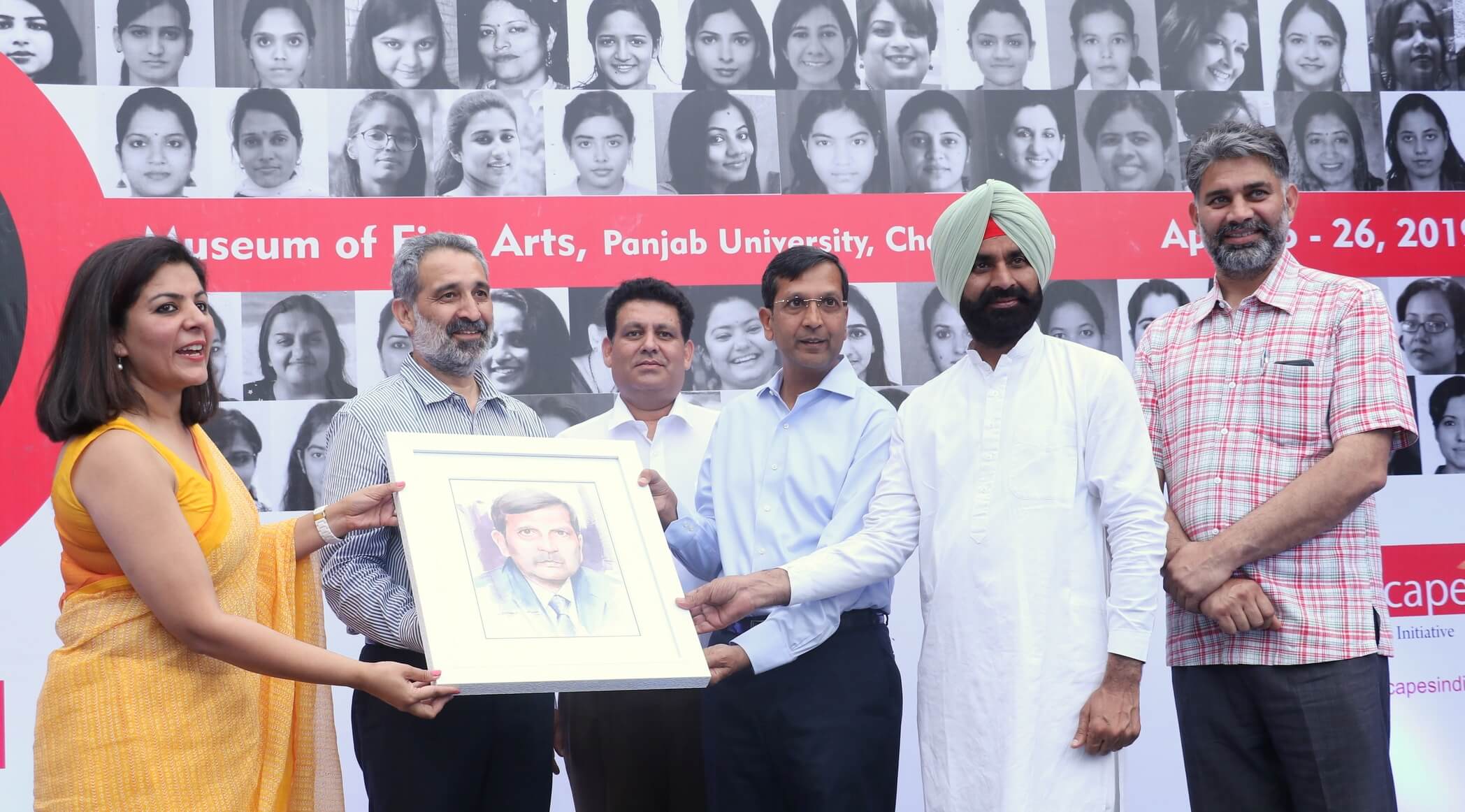 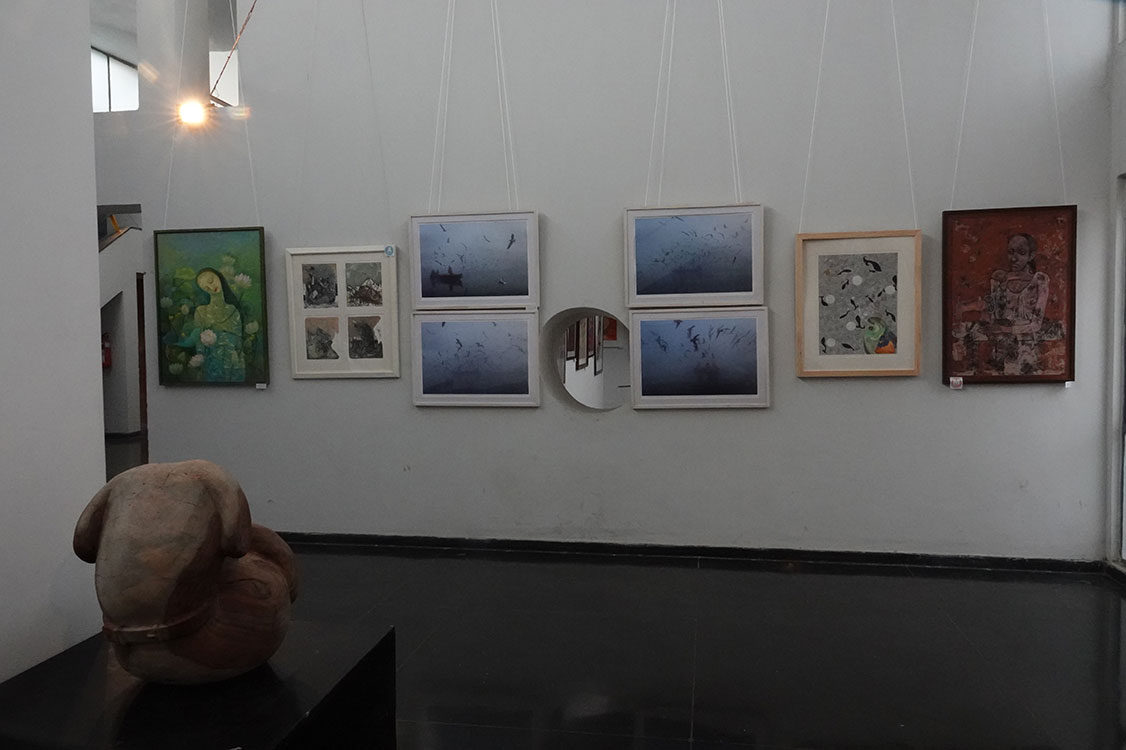 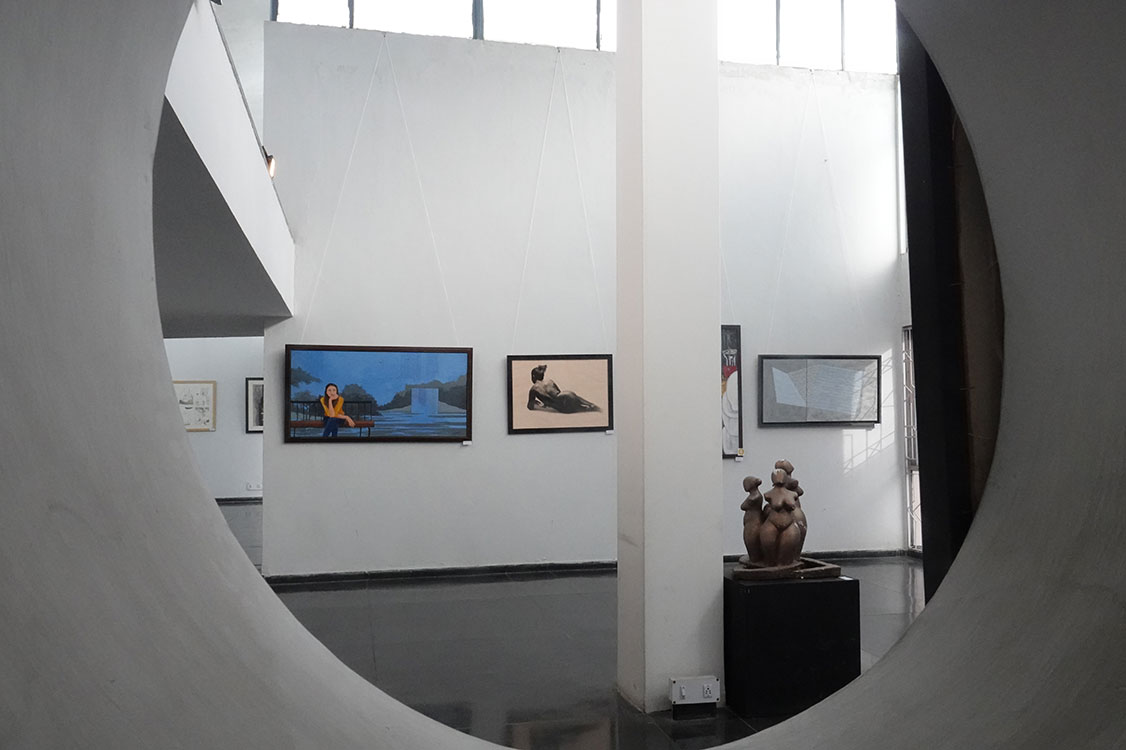 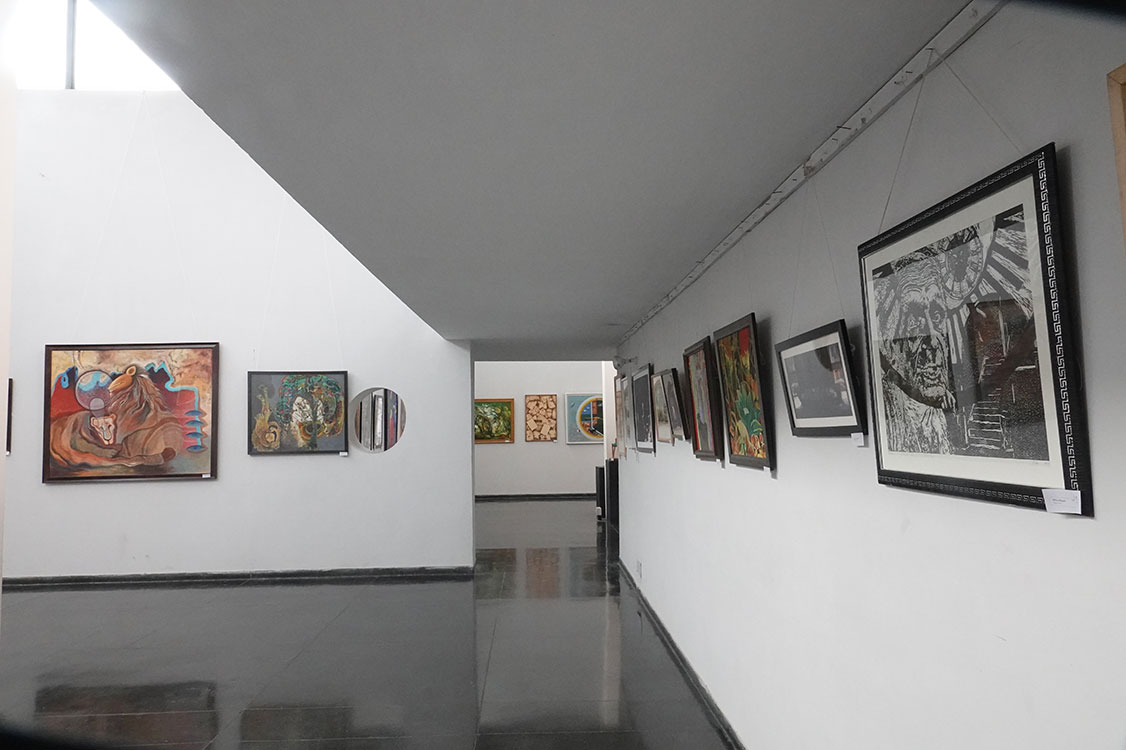 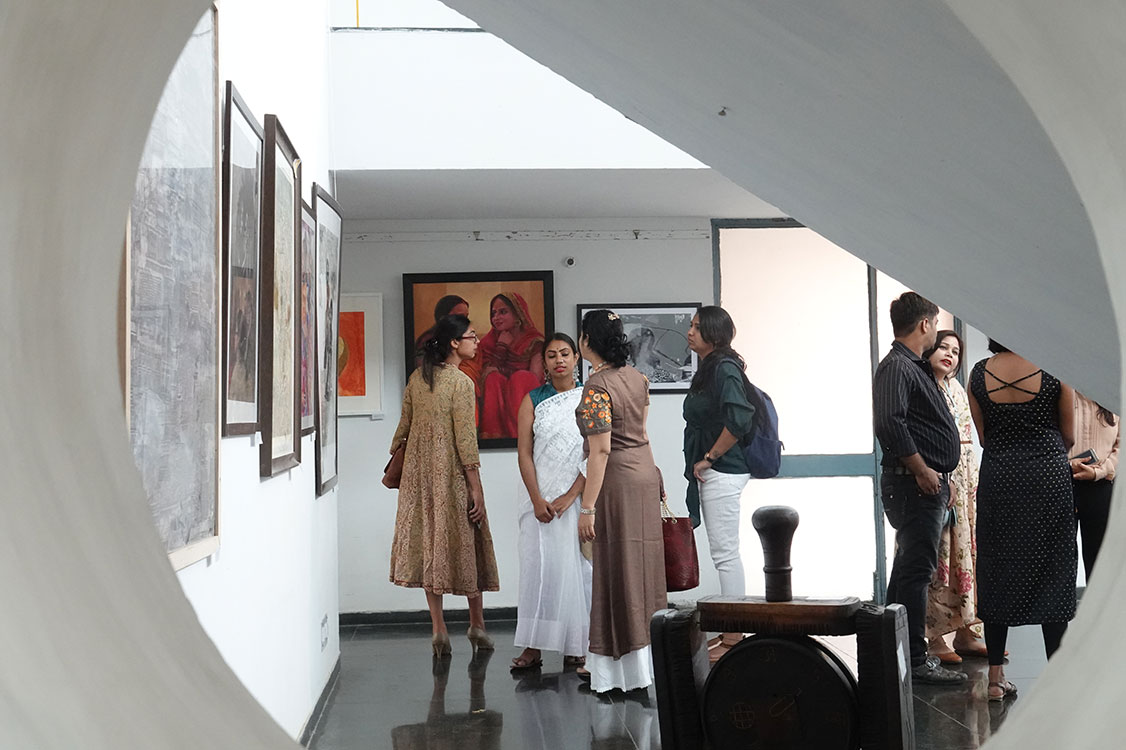 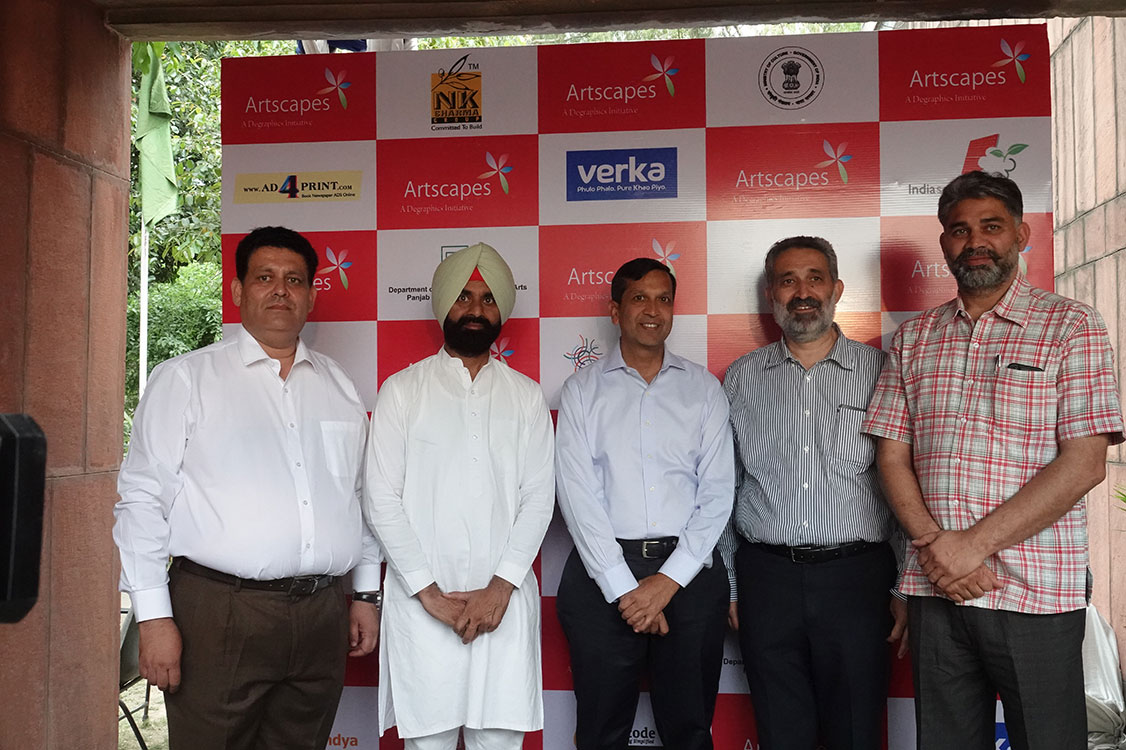 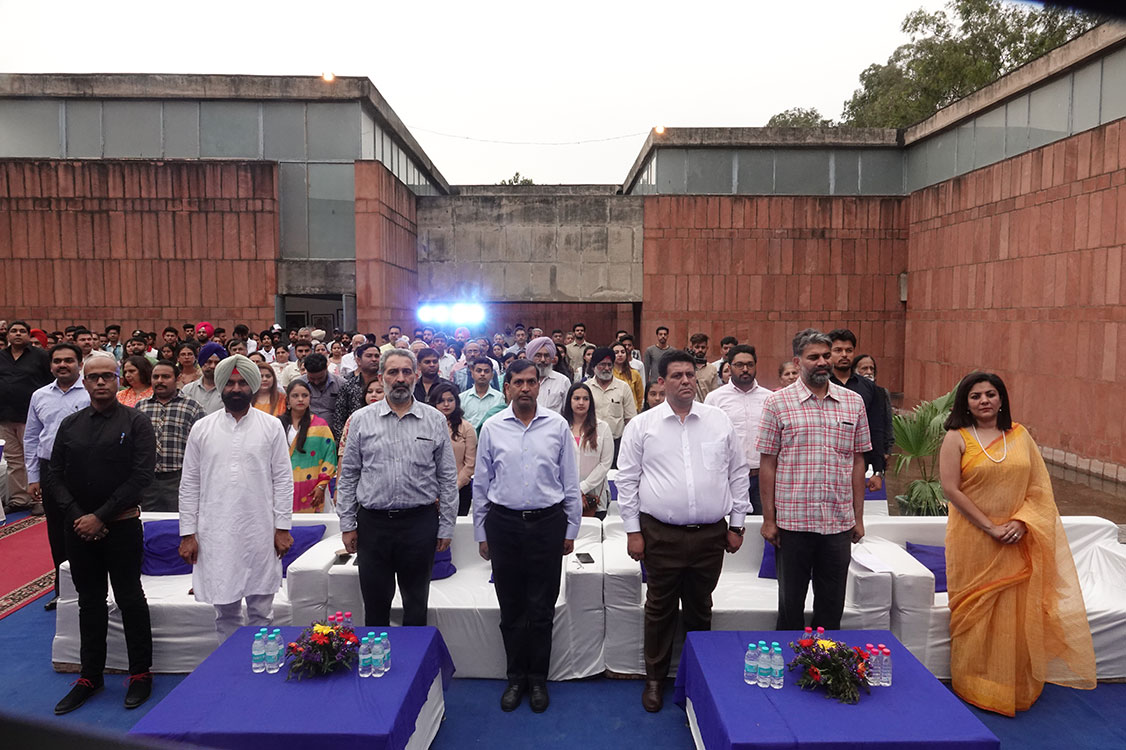 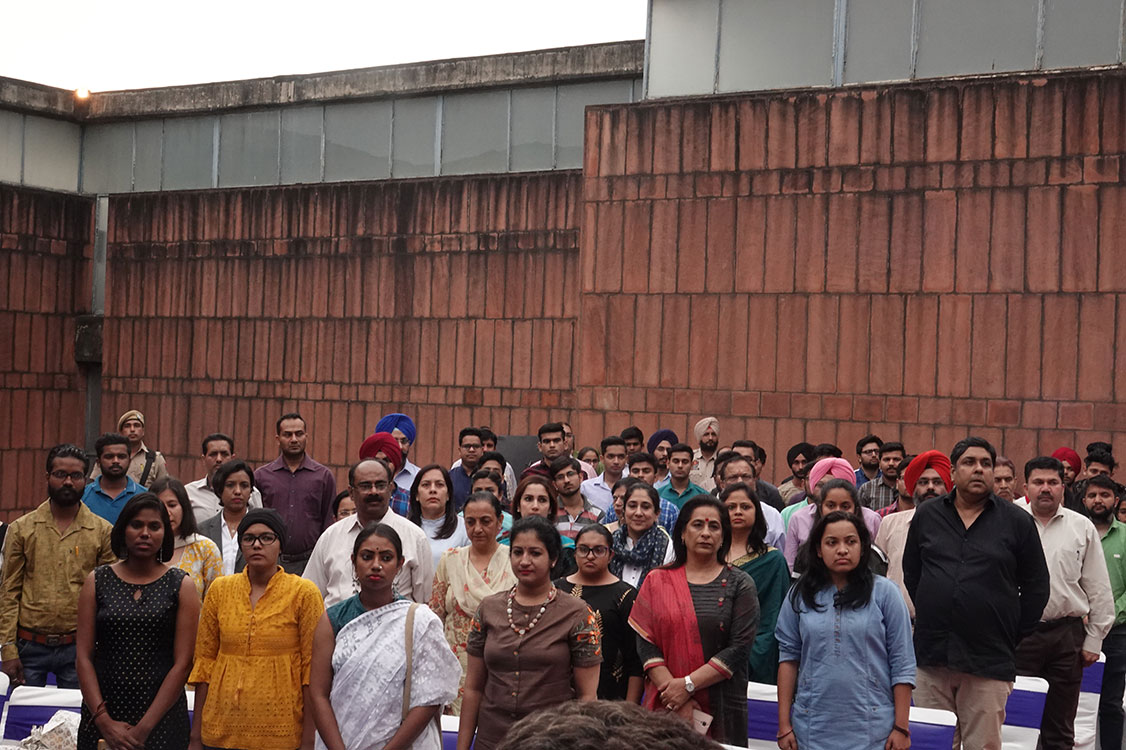 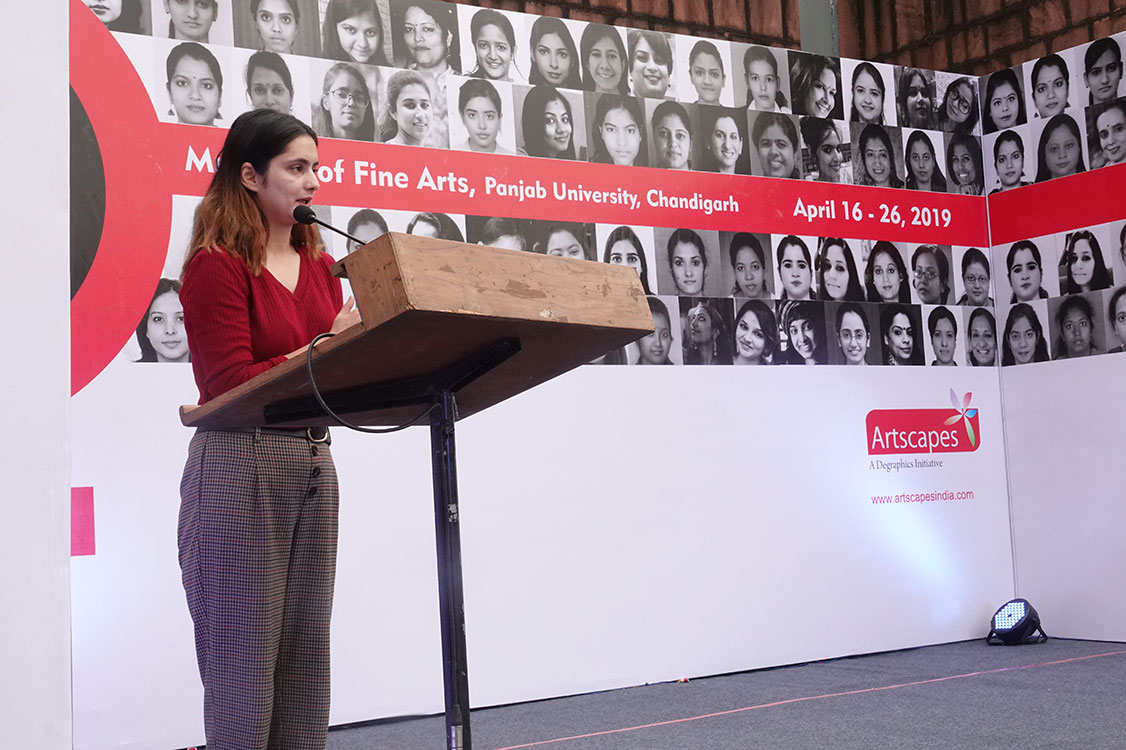 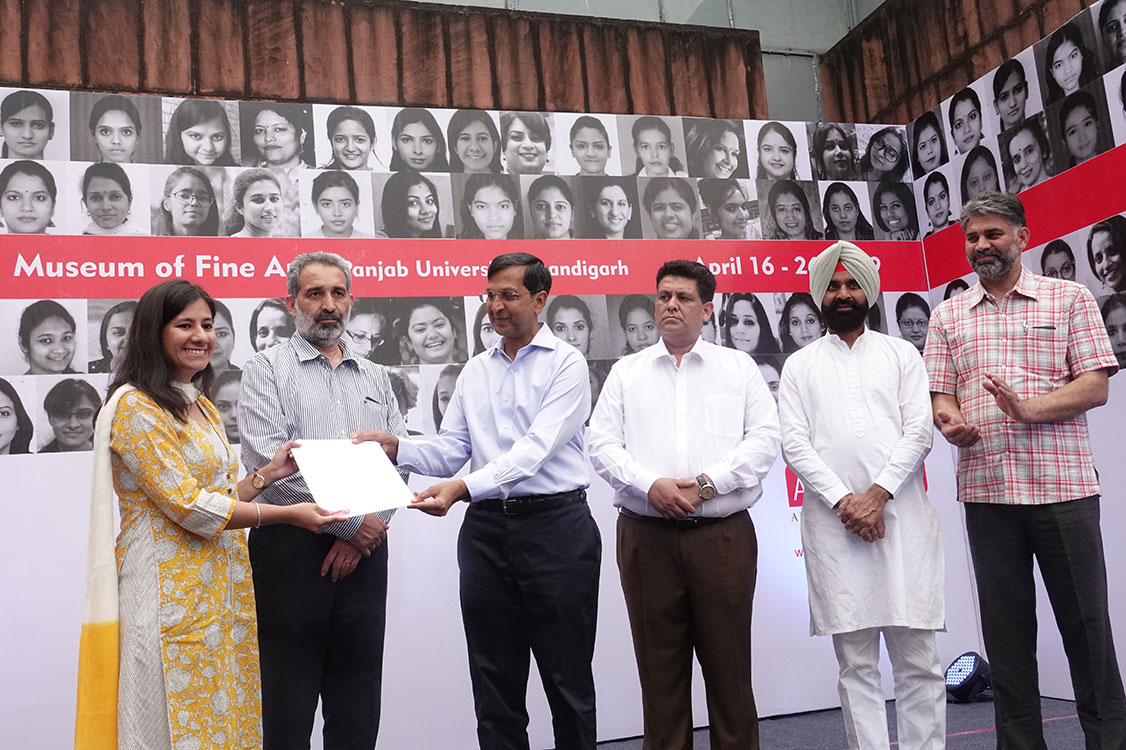 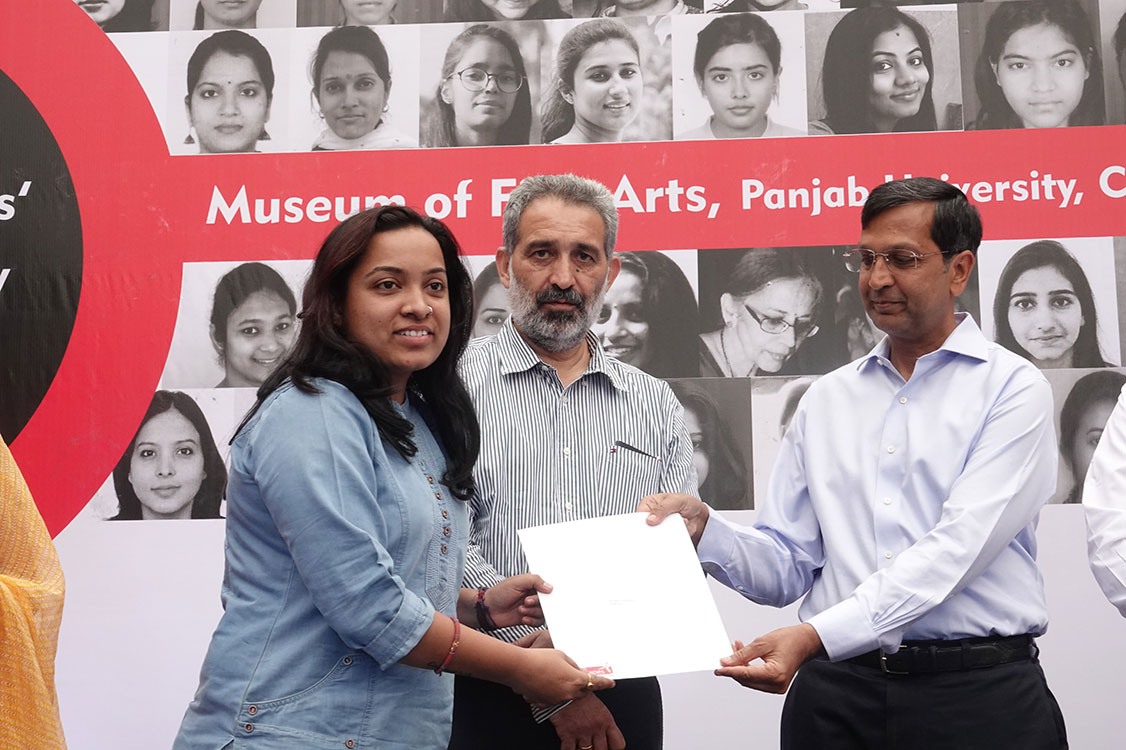 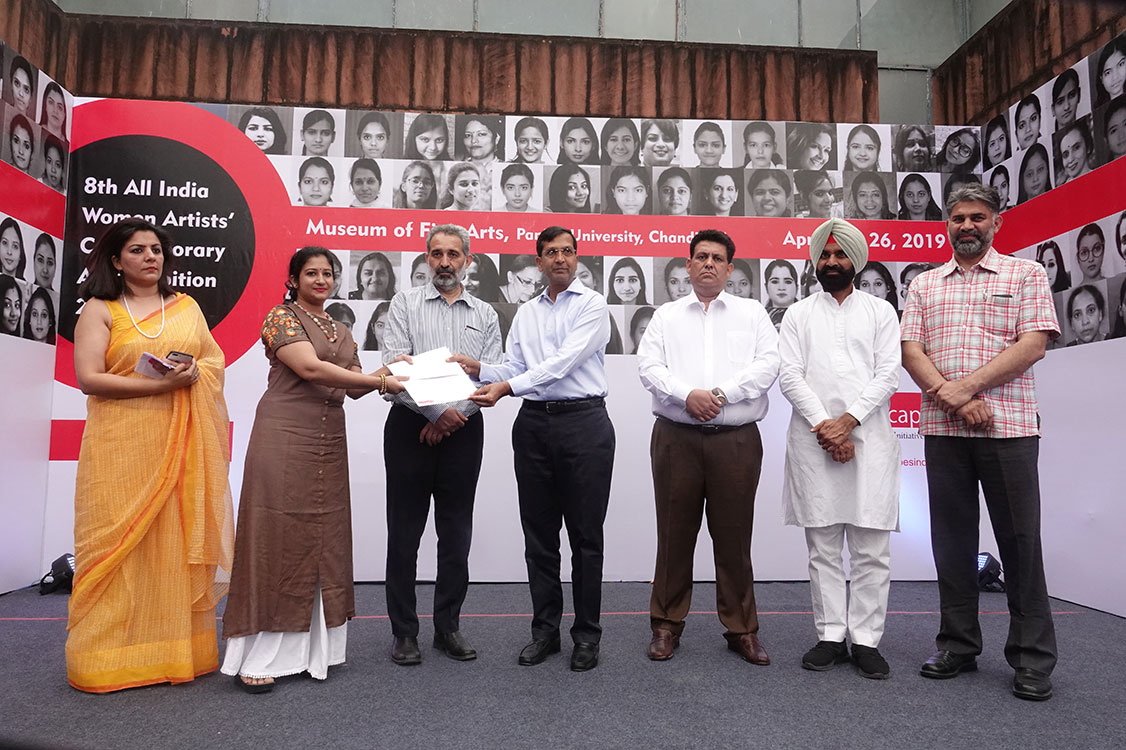 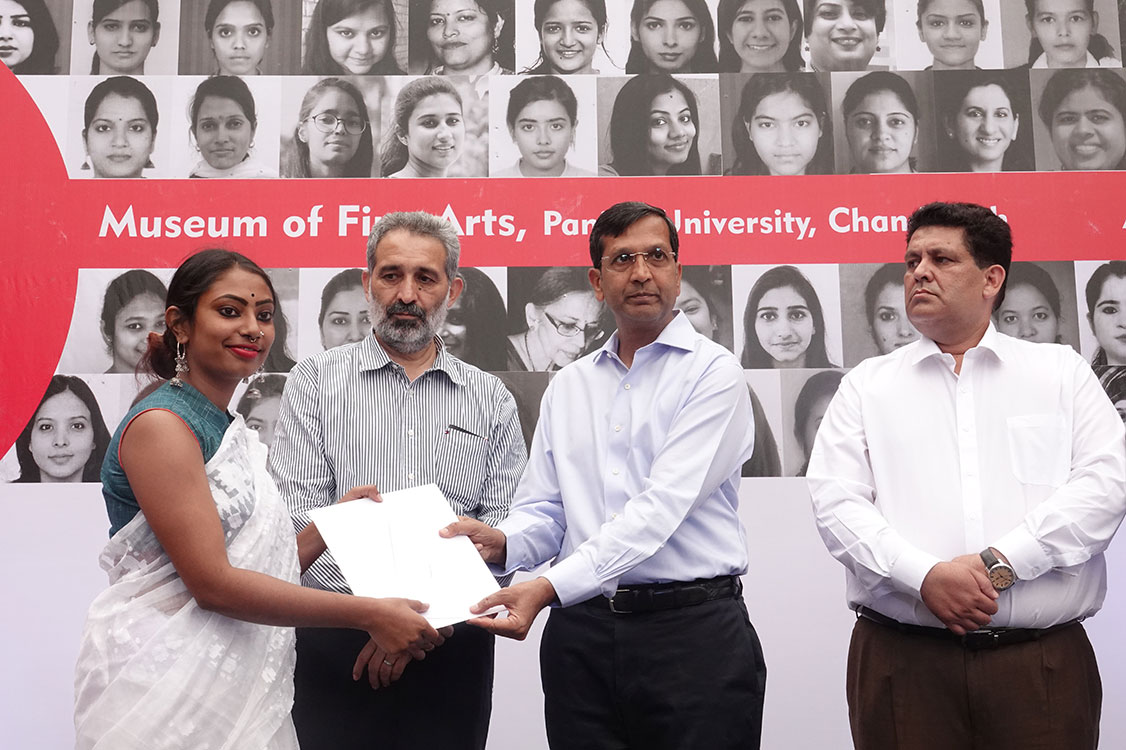 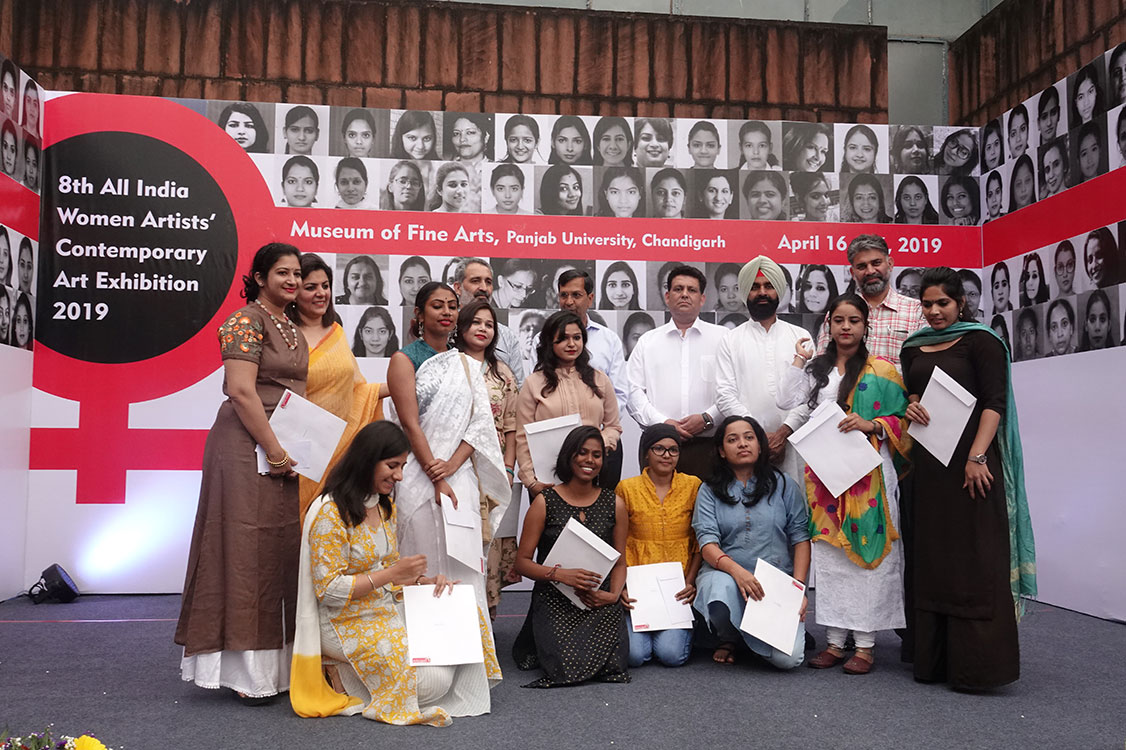 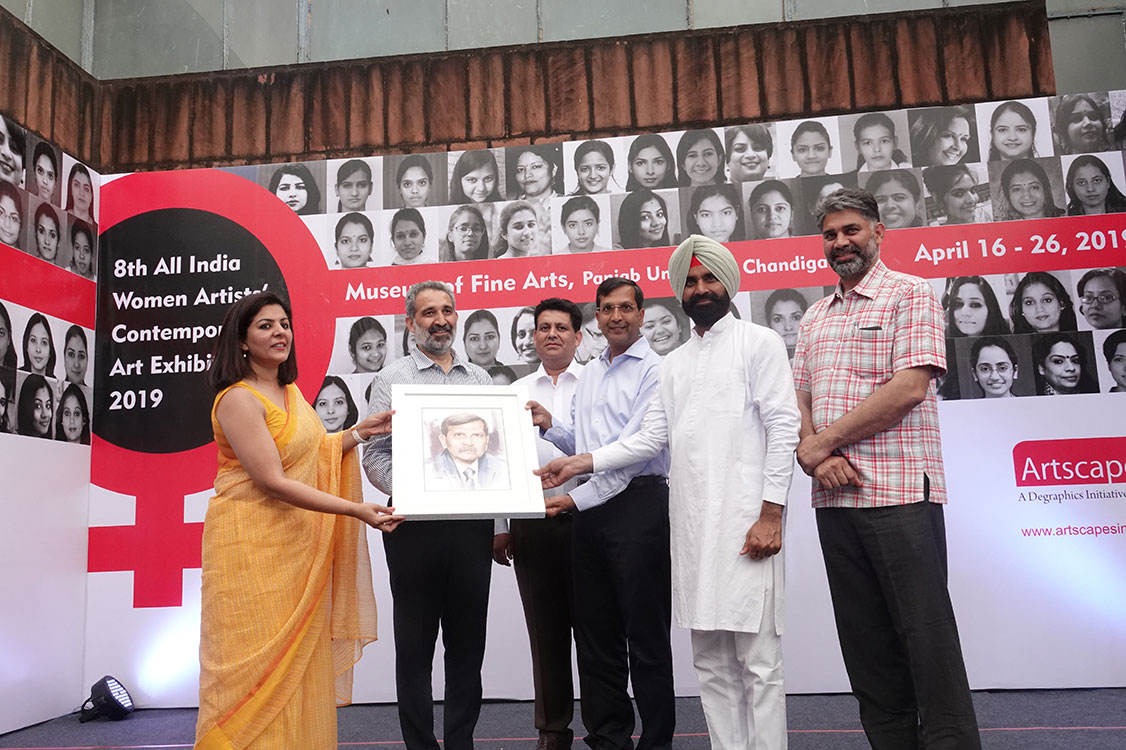 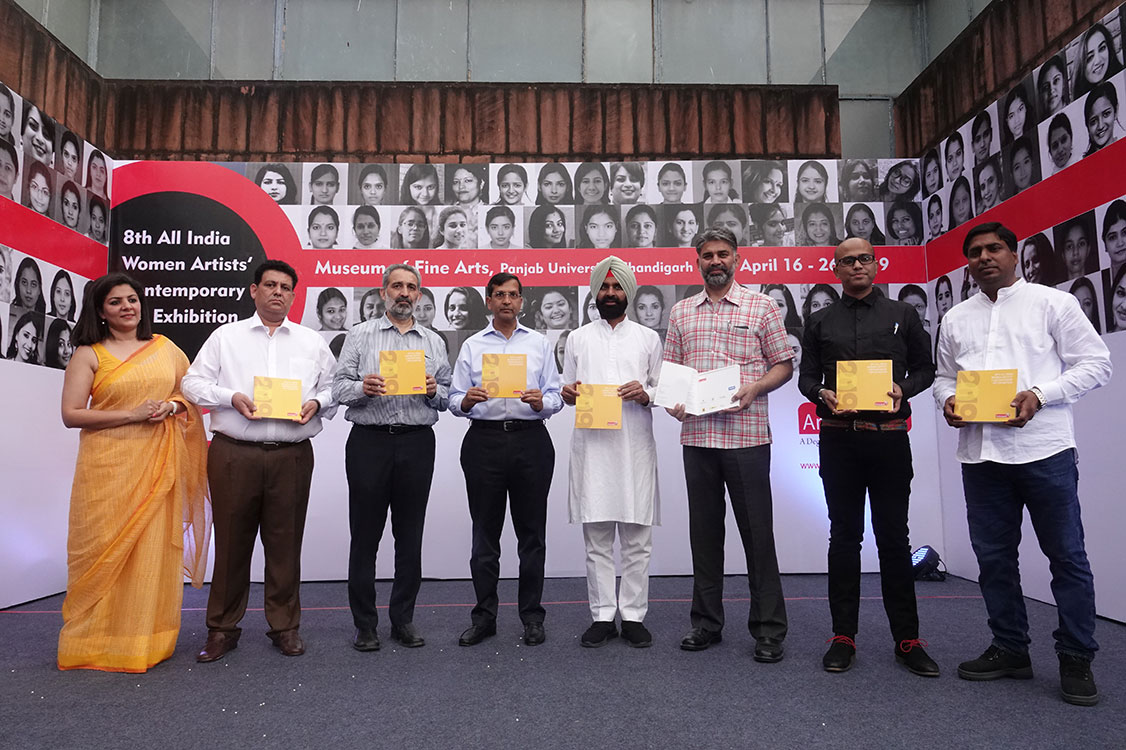 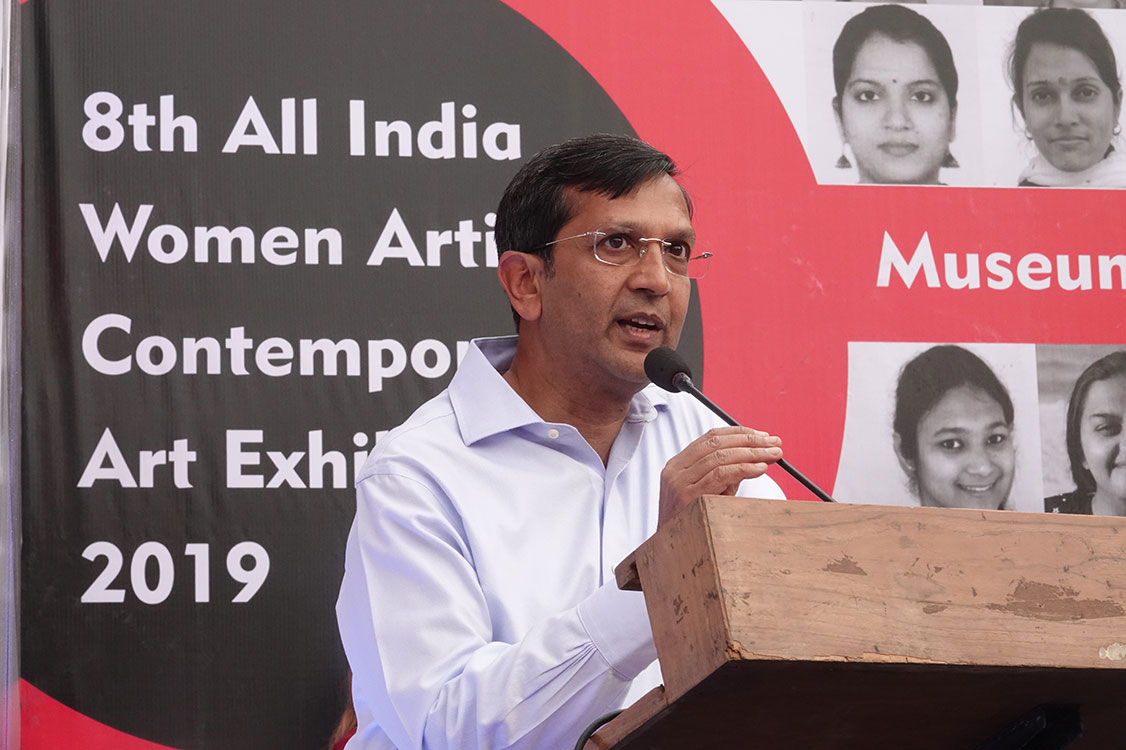 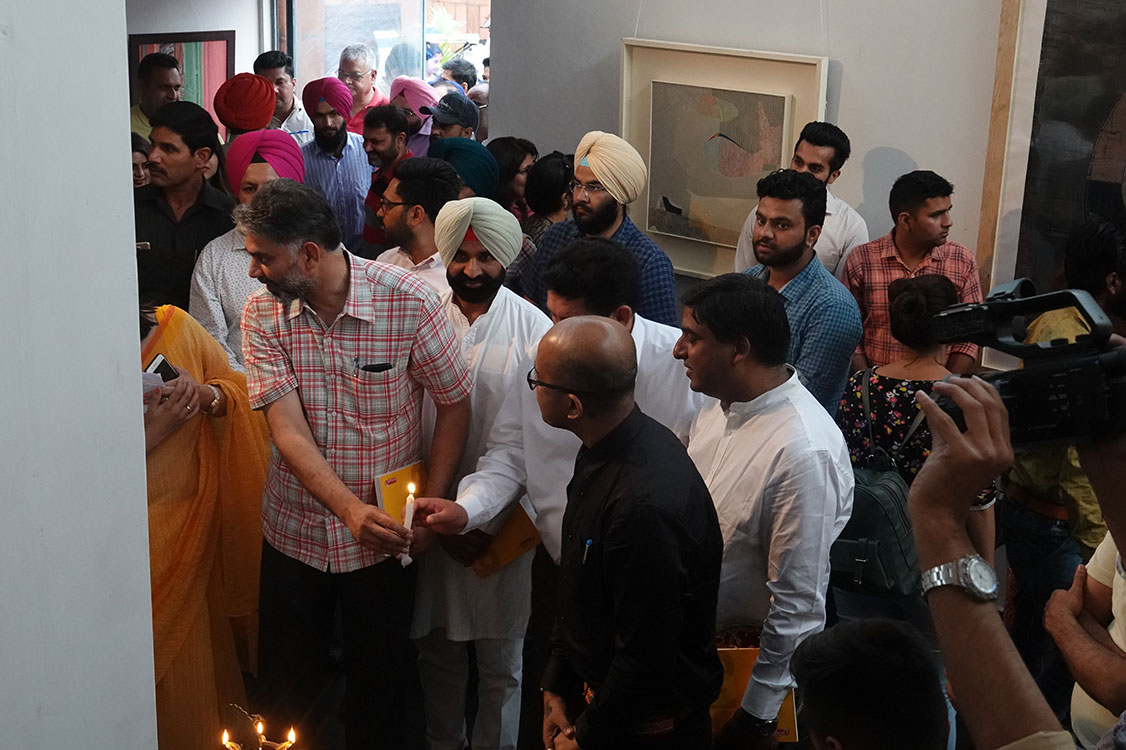 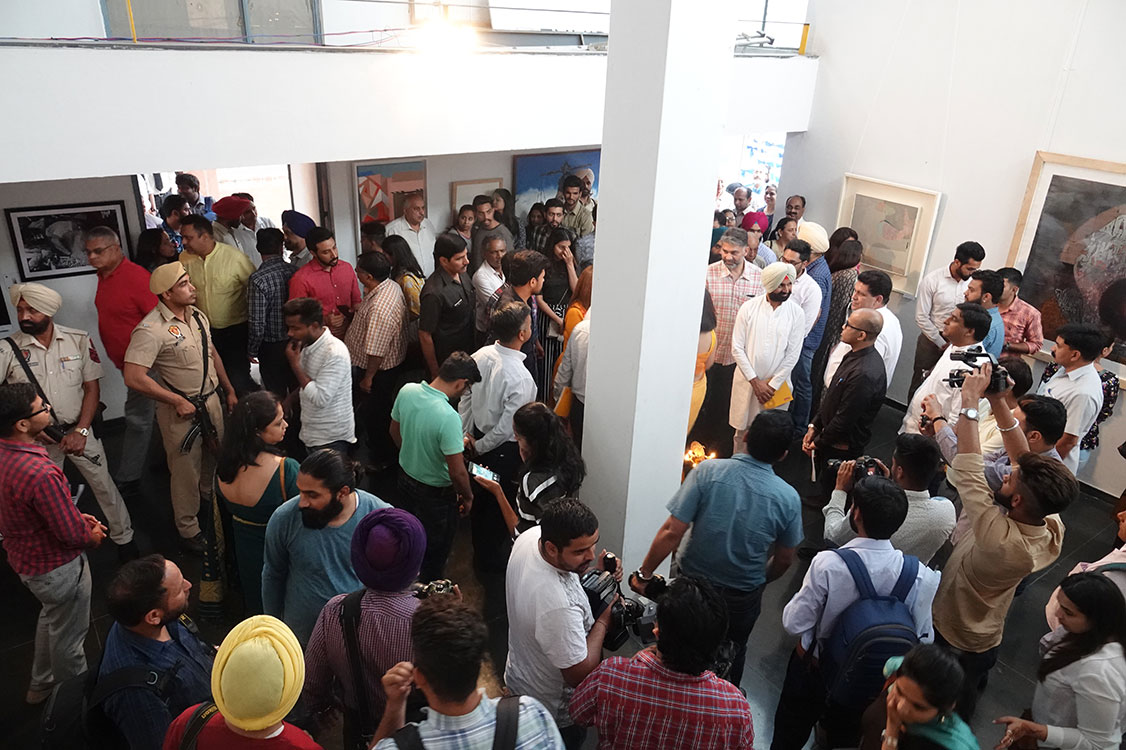 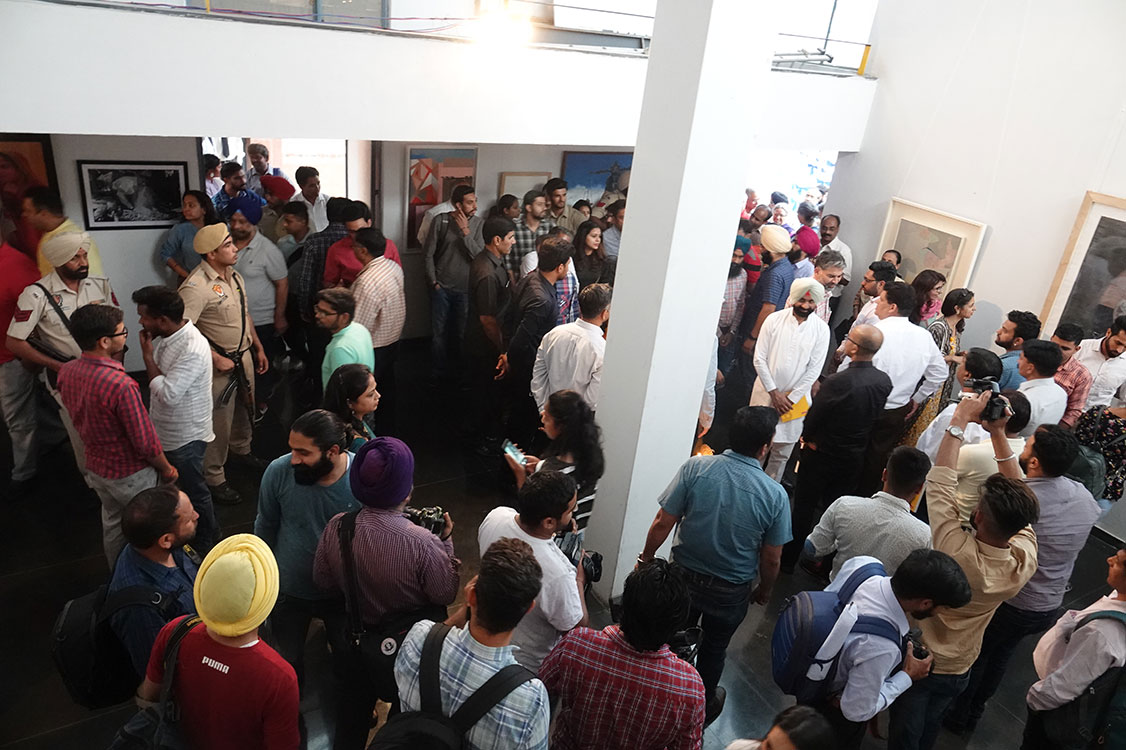 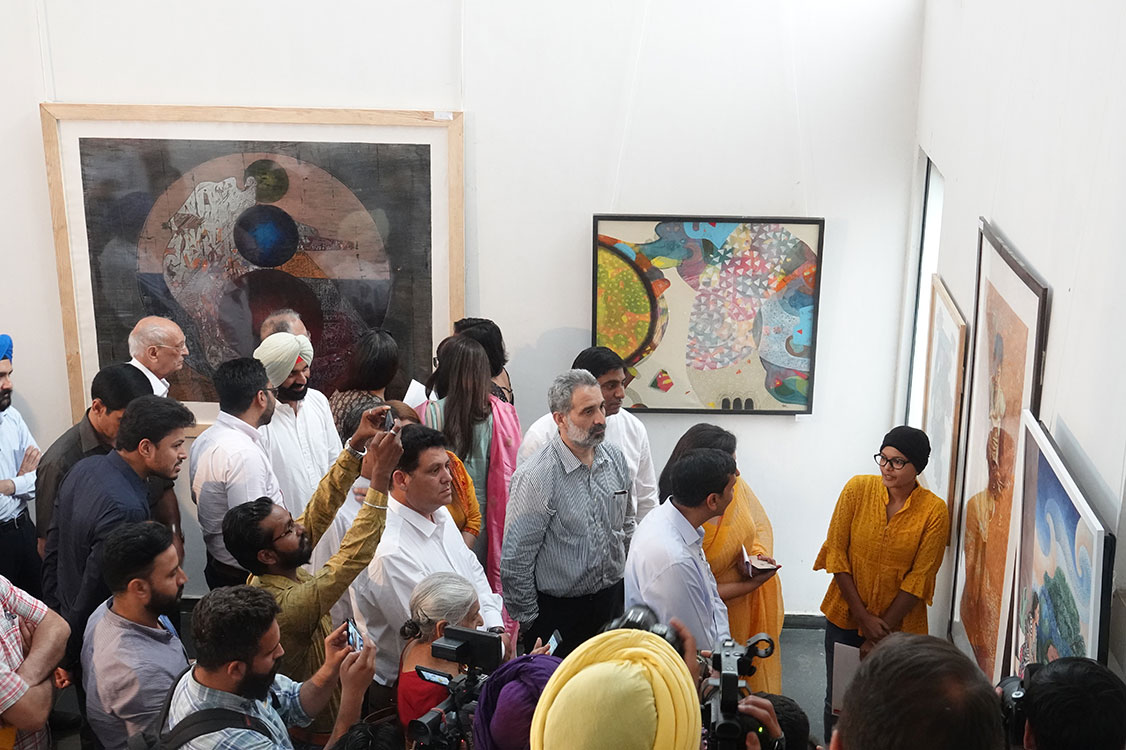 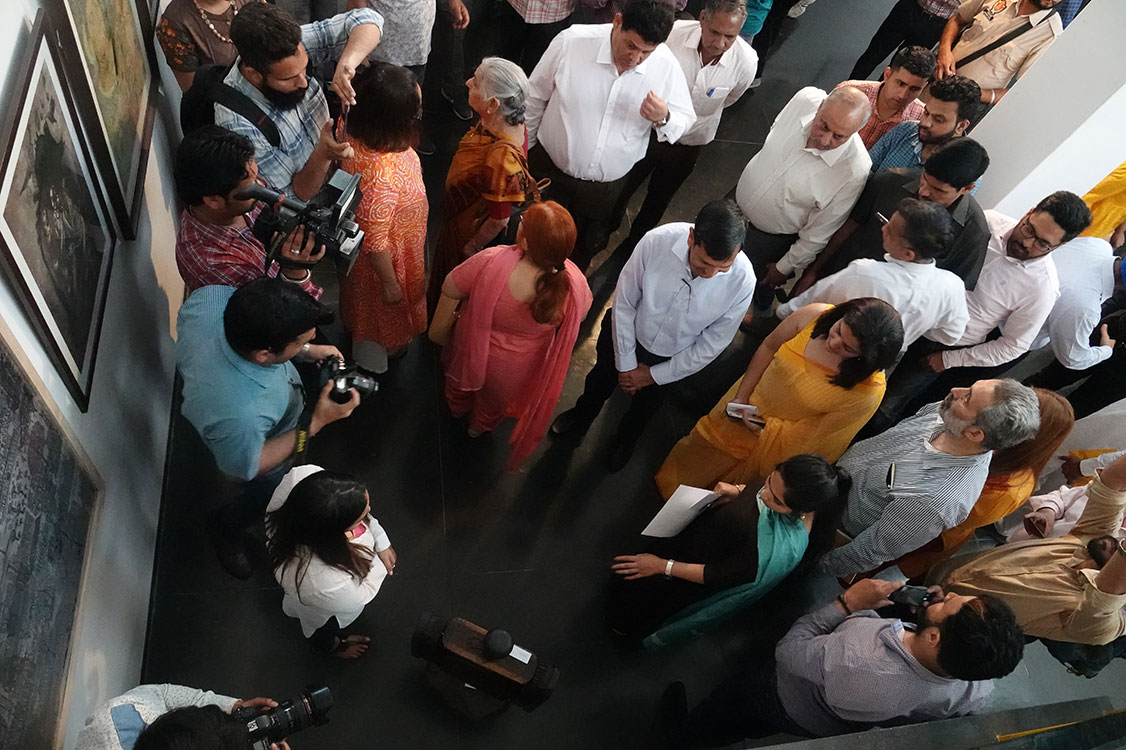 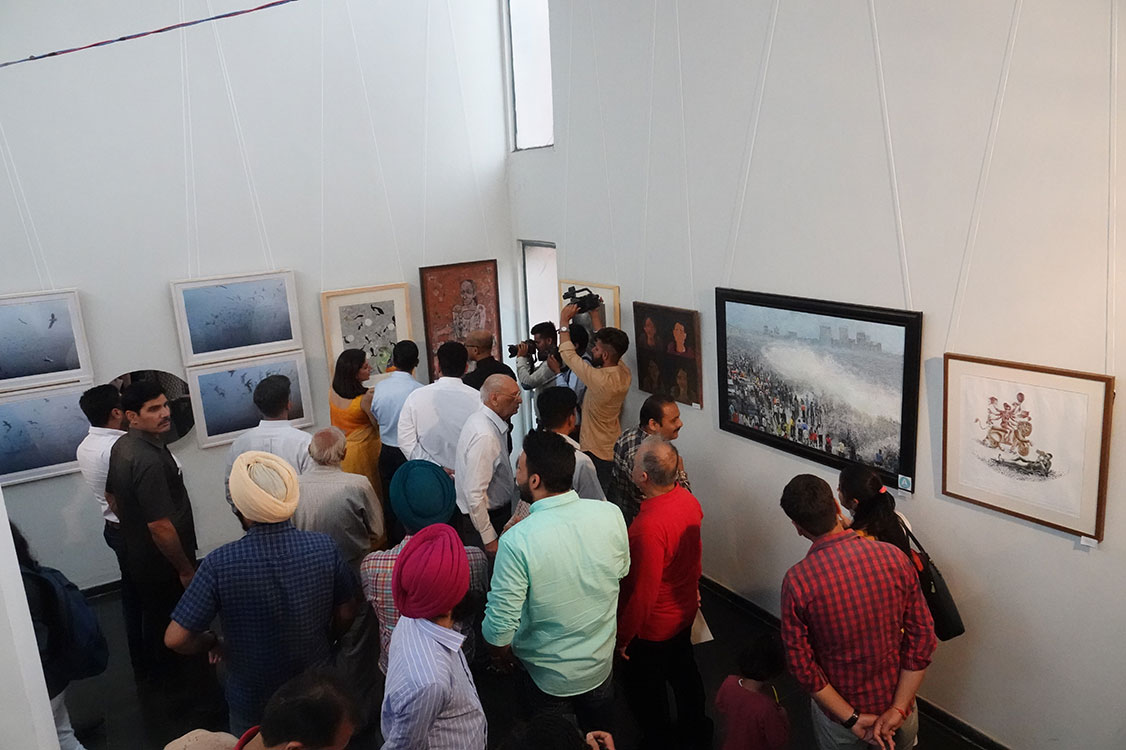 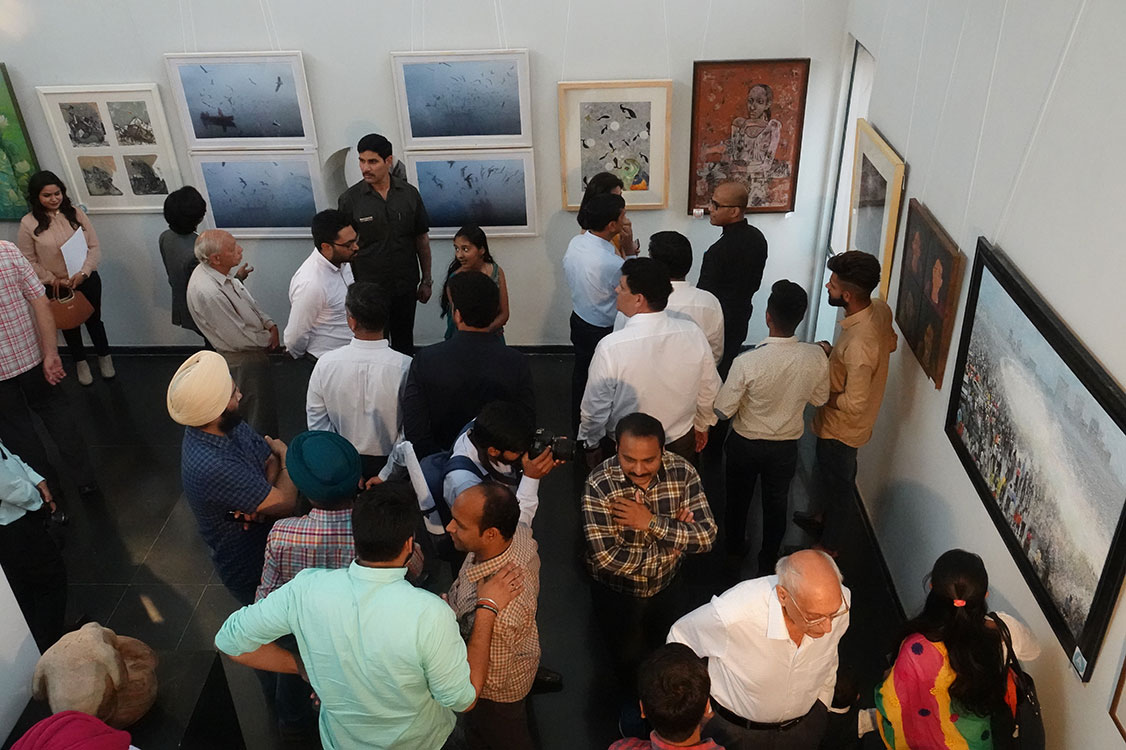 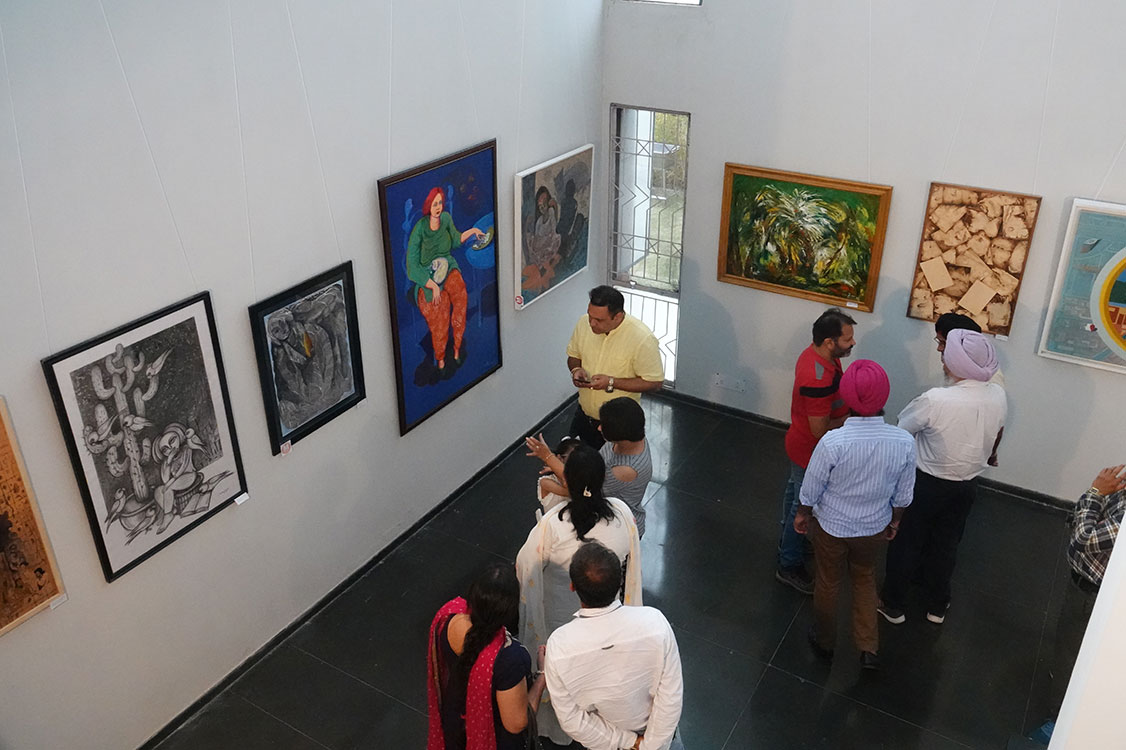